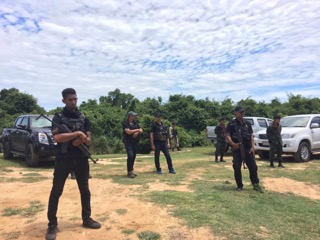 Thai security forces who escorted Paoyee Tasamoh to Tambon Pakaharang where he was shot dead, allegedly for self-defence.

Mr. Paoyee Tasamoh, 45, and Mr. Abdullah Cheama, 70, were arrested at their home in Pattani’s Tambon Pakaharang at 2am on Thursday 13th July 2017. The men were accused by the military of sheltering a suspected Patani militant named Mr. Suding Mamat who was shot dead in an armed fight with military officers on Wednesday 12th July 2017. Paoyee and Abdullah were taken to Ingkayut Army Camp in Pattani for questioning.

The following day on Friday 14th July 2017, Paoyee’s wife (Mrs. Saitong Madiyoh) was preparing food at home to bring to her husband at the military camp. It was in the morning, when a neighbor informed her that a couple of military vehicles had just arrived outside. She rushed out of the house and saw Paoyee being taken to a rubber plantation just behind their house. No one in the village including herself or the community leader had been informed by the military that her husband was being escorted back to his village. Paoyee was being surrounded by many soldiers.

“After a few minutes, I heard ‘bang bang bang’ coming from the plantation” said Saitong. She would soon realize that her last glimpse at him moment earlier would be the last time she saw her husband alive.Saitong didn’t have the heart to tell her children where their father has been for the past few days. She said that she did not know how to tell them that their father had been arrested. “I lied when they asked me where Abah (father) is. I just told them that Abah is working. But now I have to tell them everything.”

Earlier that day in morning, I was in a meeting with Patani Malay youth and civic leaders about civilian protection. We received a call from a villager from a resident in Tambon Pakaharang saying that there had been an extrajudicial killing in their village. My colleagues and I stopped the meeting and headed to Pakaharang to find out more about what had happened for fact finding purposes.

We reached Pakaharang at 10.45am and met with the villagers at a local coffee shop. We asked for more information about what had happened but nobody knew exactly because no one was allowed to enter the area where the suspected extrajudicial killing had taken place, not even village leaders. We decided to drive towards the crime scene but we were refused entry by the soldiers at the scene where Paoyee’s body was laying dead. The civic leaders and the villagers huddle up and exchanged ideas as to the next step should be. There was a general agreement that this was an extrajudicial killing. But the immediate task at hand is to get to the body, at least make sure that his corps is return to the wife and family. The soldiers guarding the scene refused our entry but we stood our ground, refusing to backoff. We arrived at the scene at 11.00am and remain there until 12.20pm. Some people, namely the local villagers, had been there since 08:30am.

It was Friday, a dray of communal prayer for Muslim men. I stood there at the crime scene with few other women from the community, feeling somewhat helpless but, nevertheless, felt that being there and continue to observe this so-called crime scene, seemilingly staged by government security officials, was the best thing to do.

While the Friday Jumaat prayer was being conducted, Paoyee’s body was transported to Pattani hospital. Saitong and I, along with the women hanging around the crime scene, rushed to the ambulance but were stopped by officers. I tried to negotiate with them to allow for Saitong to see her husband’s body. The look in their eyes tells me that they were upset at me, and the fact that they were unable to back away from my reasoning. After all, she was his wife and for all we know, this could be her last seeing her husband. In the end the security officers allowed just the wife and another person to accompany Paoyee’s body in the ambulance to the hospital. For a brief moment, the soldiers’ sense of humanity gives in as they backed off, although reluctantly, and permits Saitong to ride with her dead husband in the ambulance. Who would have know, from one moment to the next, he would be gone just like that. The fear of losing him has always been there in Saitong’s mind – a common phenomena among Malay Muslims in this restive region where suspected insurgents are taken in by officials and never made it back home. But that was other people’s husbands and other people’s sons. The worst fear for the residents of the far South is that the next victim would one of your own.

Security officer told Saitong that Paoyee had been brought to his village to show the officers where a cache of weapons had been stored in the jungle behind his house. According to the officers, when Paoyee and the officers escorting him reached the site Paoyee took a gun and started shooting at the officers. Then the officers shot back.

Understandably, Saitong and the majority of the villagers do not believe that Paoyee died during a shoot out. She and everybody else believe that the whole thing was set up and does not believe the accusation that the officers shot Paoyee in self defense when he snatched a weapon from them and tried to flee.

“It was not logical as my husband was escorted by many officers who were around him. So how could he possibly take the gun and shoot at officers? Why did you kill my husband?” Saitong asked.

Extrajudicial killing is a common occurrence in the Patani region, a historically contested region where an ongoing insurgency has claimed nearly 7,000 lives, mostly Malay Muslims. The latest such incident was the shooting of two young Patani Malay in Rueso district, Narathiwat on March 29, 2017. It is this kind of killing that fuels extremism which then becomes a cycle of violence and lawlessness. Thus, it should be monitored by the international community, especially the Malaysian government who is the designated mediator of the peace dialogue. We would like to request Malaysia to call on all parties to cease use of violence in all forms. Furthermore, We would like to call for Western governments to condemn these extrajudicial killings as it will only increase if there is no involvement from international engagement.